A couple of winters ago our instructor Nataša hopped aboard a floating home and spent a month sailing the San Blas archipelago. At night, she was gently rocked to sleep by a boat that assumed a life of its own at night, creaking mysteriously away, while the gentle murmur of the waves and constant whistle of the wind woke her up in the morning.

As soon as we arrived in Panama City and stepped out of the yellow cab onto the cobbled alleyway of Casco Viejo, we broke into sweat. Even though an afternoon downpour just washed everything clean, heavy humidity still hung in the air. The streets were lined with tall colonial buildings, some run-down with weeds reclaiming their courtyards and others converted into chic boutique hotels. We found a slightly shabby room with a rooftop terrace that was perfect for soaking up the vibrant Caribbean feel of Panama city. 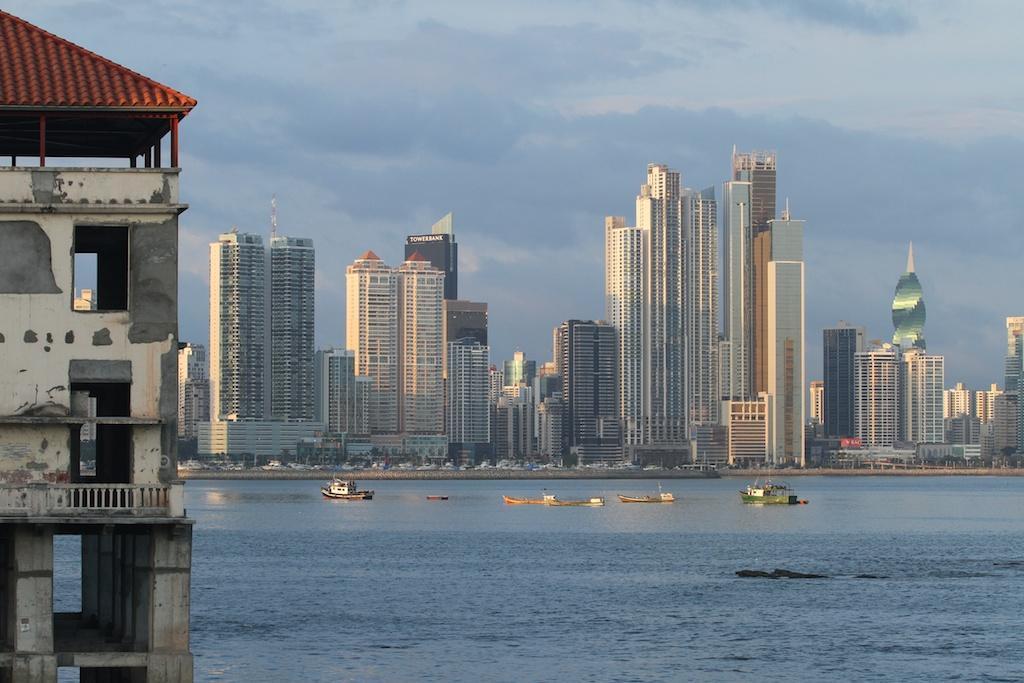 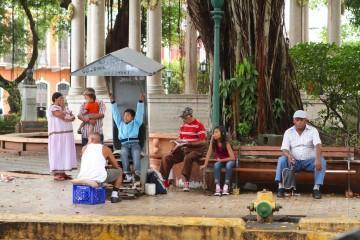 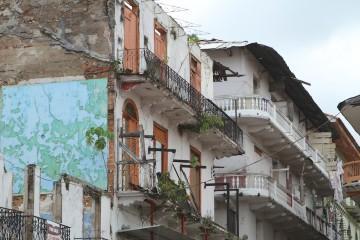 Seon, the boat captain, picked us up in a couple of days, so we set off to buy a load of provisions and then plunged down a dirt road through virgin rainforest. It was rather quiet in the car while we bounced along a rough track. I suspect I wasn’t the only one who tried to hold down my breakfast. Finally, we emerged onto a muddy shoreline and there she was, bobbing peacefully in the bay: Discovery. 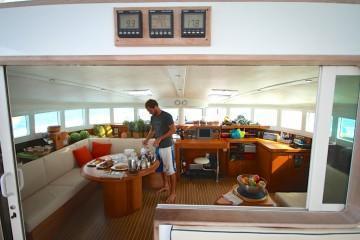 “It’s breaking!” was a scream often heard during our time aboard and the one that set Seon’s face aglow. There were also more windy days that you could shake a palm tree at: it seemed that we had arrived just in time for the northeastern trades to kick in. They usually start blowing in mid-December at the onset of the dry season and trail off in May. 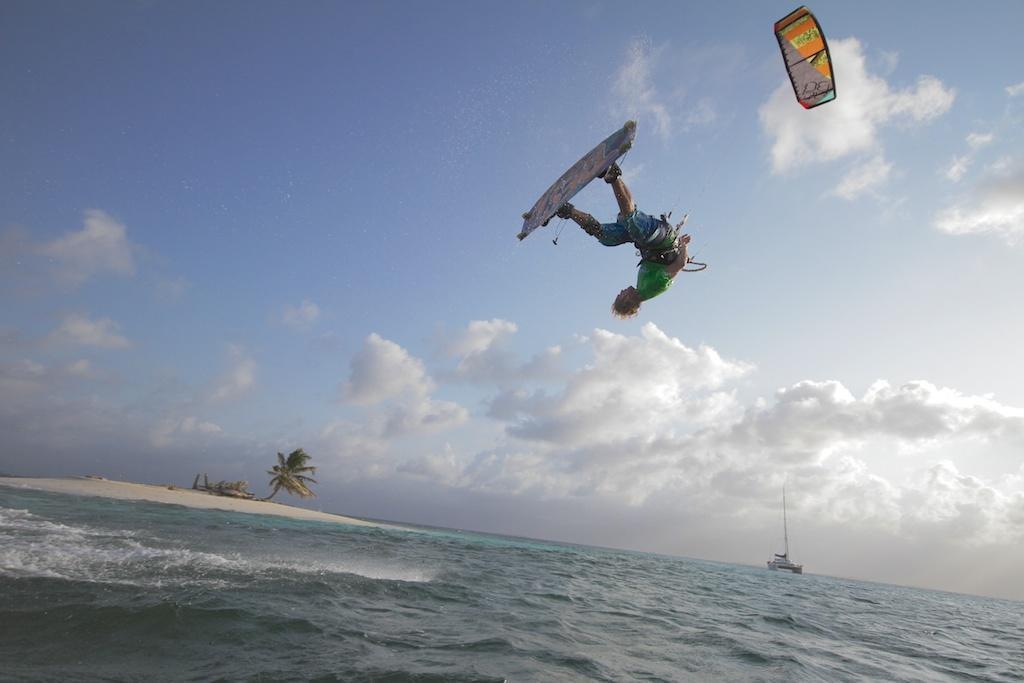 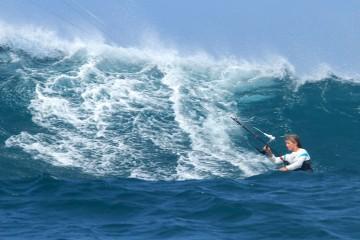 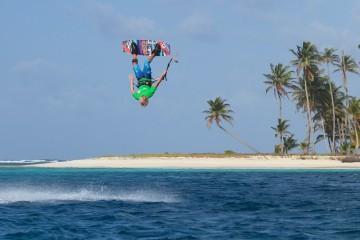 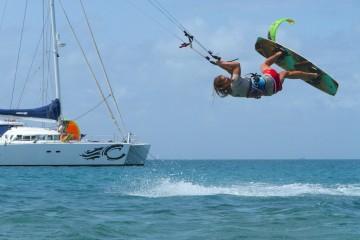 The sky darkened while our sunburnt faces continued to glow and the cold beer hit just the right spot. We watched the sun set behind the two blobs of land bursting with palm trees on either side and felt quite content with our lot in life. Even the moon grinned as the blanket of night was pulled across the world.

There was an odd day without a puff of breeze during which our captain snaked his way through mangroves and slipped into deserted bays, perfect for snorkeling, wakeboarding and gliding over buttery water on a SUP. Huge rays flitted below us, an octopus squirted ink before it dashed off and there were whispers of small alligators. Pelicans laughed as they flew by, expertly scooping up fish in their huge beaks. 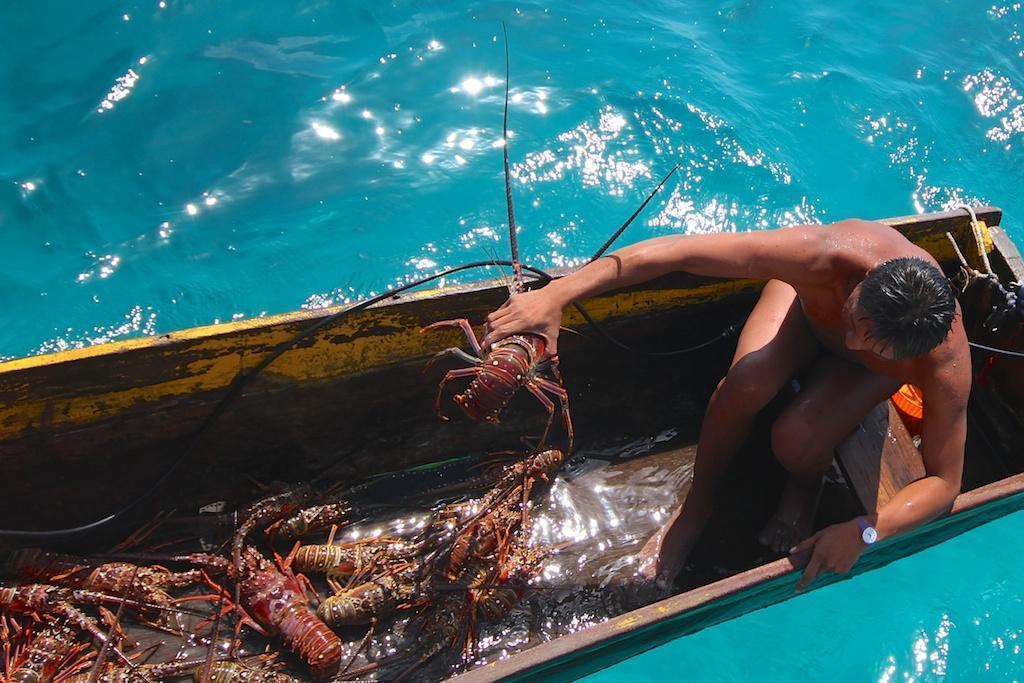 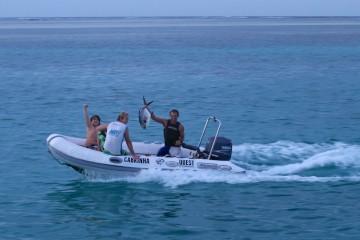 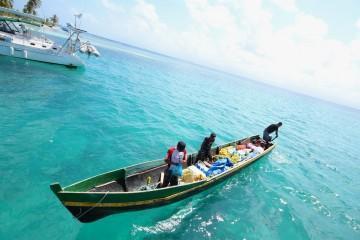 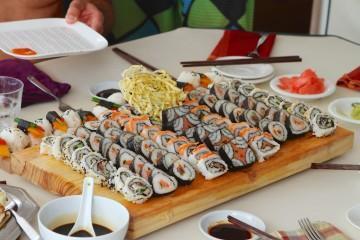 Panama’s name doesn’t mean “abundance of fish” for nothing and food often found its way to us: we crossed paths with wooden canoes crawling with crimson lobsters, transparent squid and orange-pink snappers, or overflowing with fresh fruit and vegetables.

Sometimes a tap on the hull told us that the Kuna woman arrived. Although Kuna’s tightly knit society is governed by tribal chiefs, inheritance is passed through women who also control money and choose their husbands. They are the guardians of the Kuna culture and wear traditional blouse panels, molas, a golden ring through their nose and bind their legs with long strands of tiny beads. It is supposed to make their legs look thinner. So, perhaps we are not that different after all? 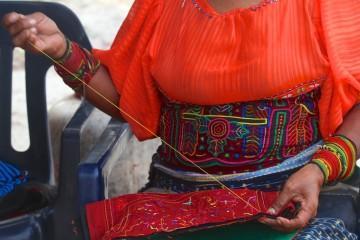 Eager to feel soft sand under our feet (and with instructions to come back with as many coconuts as we can carry by our chef Bobi) we went for a trip to an island that was so small the sea on the other side was visible through gaps in the trees. The Kuna family whose turn it was to look after the island and coconut crop was preparing a fish wrapped in plantain leaves over a smoky fire. We admired conch shells that Kuna elders blow into to alert their gods to monstrous storms that sometimes wash over entire islands. The Kuna kids were as interested in us as we were in them and soon a Frisbee was flying around and they were showing us how to pick hermit crabs out of dead tree trunks. We left laden with coconuts and wondering what would it be like to live here, in this time capsule, without all our modern pads and pods. 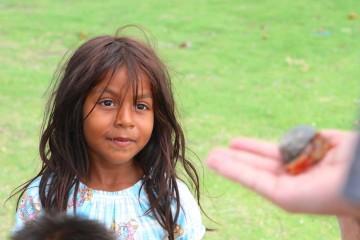 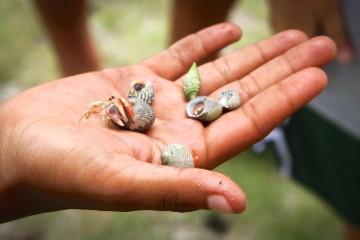 One day, the swell got a bit bigger. And as these things go, the boys were feeding off each other and tow in surfing somehow seemed a good idea. Gunning the dinghy down the faces of waves, the roar of breaking waves in everyone’s ears. It was all good fun until… “Oh no,” was the only thing that went through Miguel’s mind as he watched the reef suck dry on his left and the right side of the dinghy getting caught in the lip of a wave that unexpectedly jacked up. His stomach lurched with that sinking feeling of losing control. The dinghy was flipped over and him and Michaela were thrown onto a reef amidst coral heads. 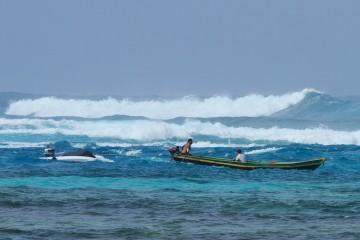 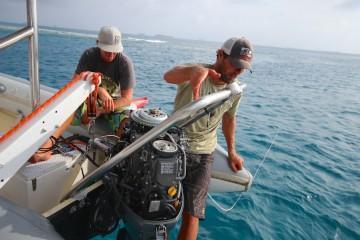 After a long struggle on the reef and a helping hand from the Kuna who saved the day with their snorkels and a wooden canoe, the dinghy was towed back to Discovery, surfboards, paddles and a fuel tank were fished out of the water, and Miguel and Seon went into a race against corrosion.

Luckily, the only thing that got hurt was a couple of egos and then, the same wave that almost ended in disaster gave us an unforgettable night under the full moon, riding waves, screaming at the other barely visible kiters, leaving nothing behind but a shiny wake of phosphorescence. After all, what could go wrong?

It’s hard to describe the sense of deep peace when the crashing surf provides a constant background noise and your day is controlled by the swell and lull of the sea. In the end, we had to agree with the Kuna on this one: wild delight runs through man and true happiness is experienced only within nature’s presence. Preferably in a hammock.

We hope you enjoyed Natasa’s story and if you’d like to see what it’s like to sail in the Caribbean for yourself, join us for a Kite Safari in Martinique and the Grenadines and treat yourself for a trip of a lifetime!